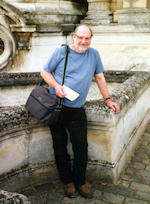 Born in the mining village of Spennymoor, County Durham in 1931 he was brought up by his grandparents, thinking they were his parents. He missed a lot of school and much time confined to bed due to contracting TB. After the war he went to Nottingham University taking an arts degree and became a teacher and in 1977 he researched and wrote his seminal work, ‘Catching Them Young’ two volumes on the inculcation of stereotypes and prejudices on the basis of class, gender, race and religion through the fiction they were given to read .

These books had an important and widely recognised influence on teachers and parents after its publication, making them aware of the harmful ideas that shape the culture and the young people who grew up in that culture. In 1992 he followed it up with ‘Playing them false’ in which he showed how the same elitist, sexist and racist attitudes and political ideas were being instilled through toys, games and puzzles, and he exposed the role of the commercial interests in priming the compliance of future consumers and the mass media.

Bob’s hatred of capitalism and the continual wars on which it thrives, and the cruelty, suffering and death it involves, led him to write and publish several volumes of poetry, expressing his hatred and anger of the violent and aggressive culture that he saw as the result. His last book ‘The Wrong Bob Dixon’ was published only this year. In this immensely readable book, that he modestly calls ‘a social account’ ; he shows clearly how his childhood in a family broken by narrow attitudes towards his unmarried mother, his illness and the war had affected him, and how his life post war had been blighted by those same narrow attitudes and the political system that confines the ambition and natural talent and creativity of young people in the education system.

Although his earlier books are now out of print, ‘Catching Them Young’ can still be read on-line, along with some quotations and poems from other books.

He will be greatly missed by his many friends who heard him read some of his verse at the 2008 Peace One Day celebration held by Bromley Peace Council only two weeks before his death. He has left a wonderful body of work that illustrates one man’s life and his ideological consistency in working class Britain from 1931-2008